Help needed for one in 10 Londoners in West End firms, mayor says

In a letter to the prime minister, the Labour mayor said the area was the “UK’s economic and cultural powerhouse” employing one in 10 Londoners.

Footfall in the West End is currently 63% lower compared to this time last year, according to figures from the New West End Company. 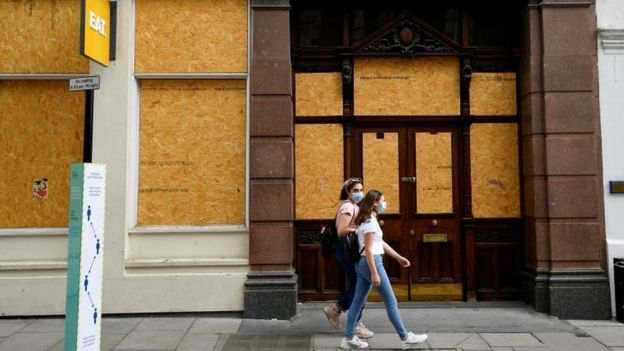 Also Read: PM vows to build ‘stronger than ever’ economy ahead of Northern Ireland visit

The number of people visiting the the West End increased when non-essential retail stores reopened on 15 June, but the New West End Company said there had been a plateau “at less than half of usual levels” since then.The group, which represents 600 retailers and landlords in Oxford Street, Bond Street, Regent Street and Mayfair, has forecast a £5bn drop in annual retail sales for businesses in the area.It has also warned that a third of the 150,000 employees it represents could face redundancy.Chief Executive Jace Tyrrell described the “next couple of months” as “a defining moment for hundreds of West End businesses” with research showing that people’s concerns about using public transport was particularly affecting the number of visitors.Image copy right PA MEDIA Image caption Sadiq Khan said businesses in London faced the “perfect economic storm”In Mr Khan’s letter to Boris Johnson, he set out eight proposals which he said would ensure the West End could survive, including extending the business rates holiday beyond the end of March next year and creating a financial aid scheme for London’s businesses.Commenting on the letter, the mayor said London had been the “economic engine of the UK” for decades, with the city accounting for a quarter of the UK’s total economic output..